The Lucombe Oak - a Tree for a Neighbourhood

Submitted by Mill Drive and Cedar Way residents including Gill Perry, Belinda Samrah, Adrian Vieler, Laura Swash and Tony Baker, April 2021
​This Lucombe Oak is a rare and historic tree in Henfield, and seems unusual for an oak because it keeps some leaves all year. Residents believe it could have been planted by William Borrer, and the Museum’s information boards suggest the same. It is much loved by Mill Drive residents past and present, and we also know that there is at least one resident of Cedar Way who values it too as he was recently measuring its girth and inspecting it for his research.
The Mill Drive Lucombe Oak has become a focal point for street celebrations and commemorations. One resident writes about the significance of the tree for people living in our road:

‘We moved here in 1994 and we had a Street Party in 1995 as to celebrate 50 years since the end of the war. It was a great afternoon and evening and this was recognised by a small badge on the road sign at the bottom of the road which was awarded to Mill Drive for the best dressed street party. It was the start of neighbours really getting to know each other well and I think we may well have had a street party most years afterwards, certainly for Royal Weddings, Golden and Diamond Jubilees and of course Carols around the tree before Christmas.’ 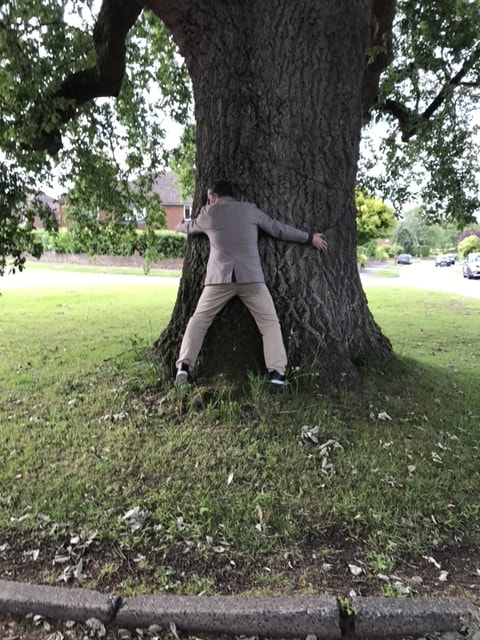 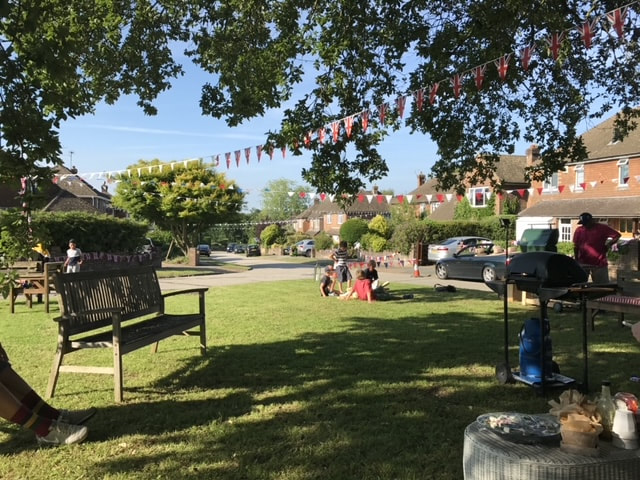 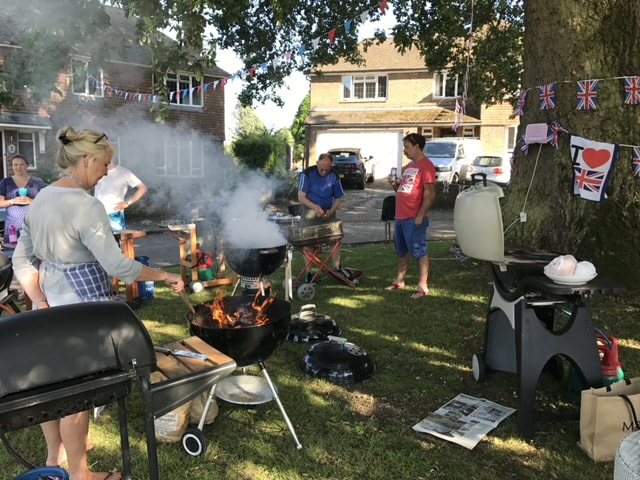 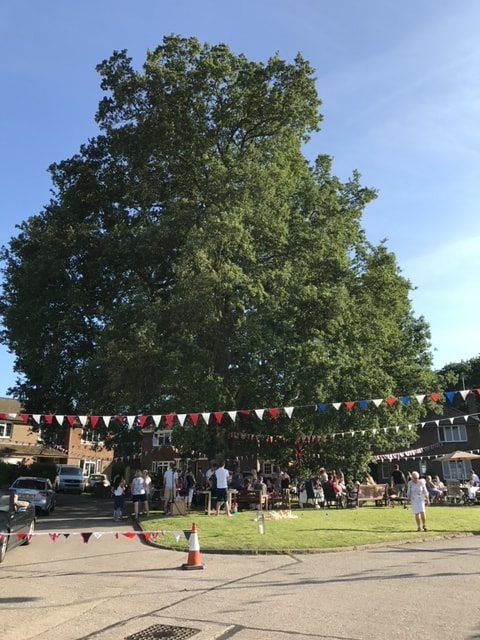 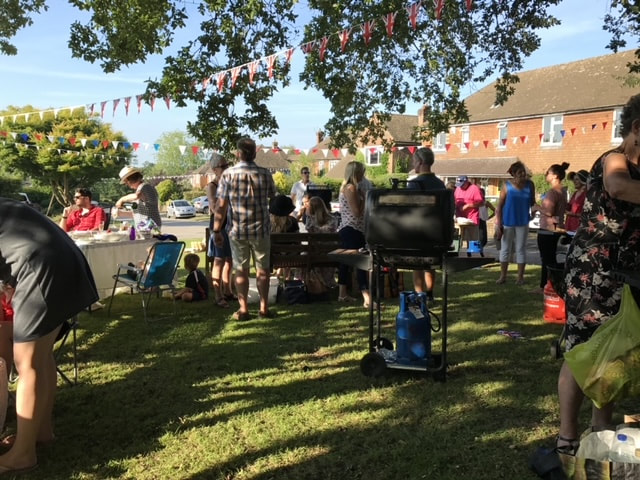 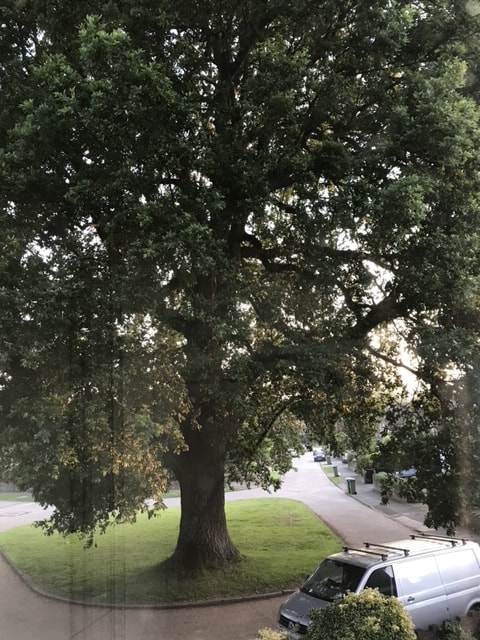 The Mill Drive community and the oak, including a June 2017 BBQ to commemorate Jo Cox MP
In June 2017 there was a wonderful summer street party under the tree, to mark the positive legacy of MP Jo Cox… The More in Common Great Get Together, where people thought about what we have in common rather than what divides us. The shady Lucombe Oak was a very fitting place for neighbours to share this time.

Carols at Christmas have been sung under this Lucombe Oak tree for many years, attended by past and present residents and their families and friends every year. There was always a friendly rivalry between all the small groups represented, who took turns to lead on singing a different day in the 12 Days of Christmas. Usually the loudest were the lusty voices leading on Five Gold Rings. But in 2020, we could not do the traditional carols event due to the need for social distancing and Covid-19 prevention measures. 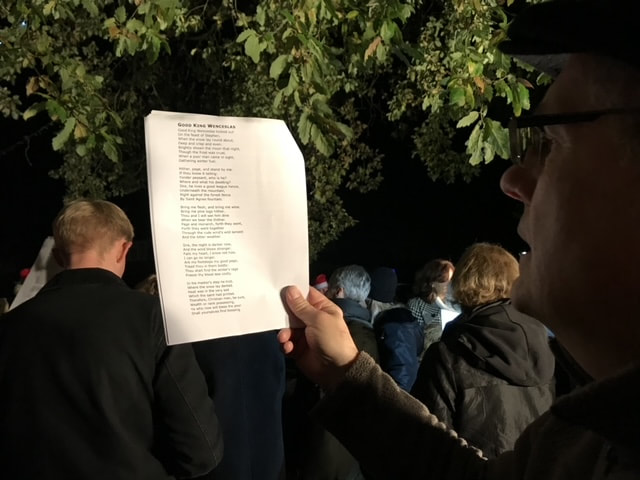 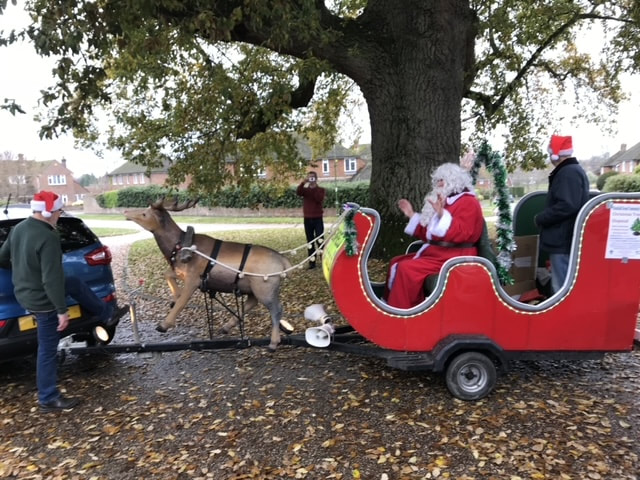 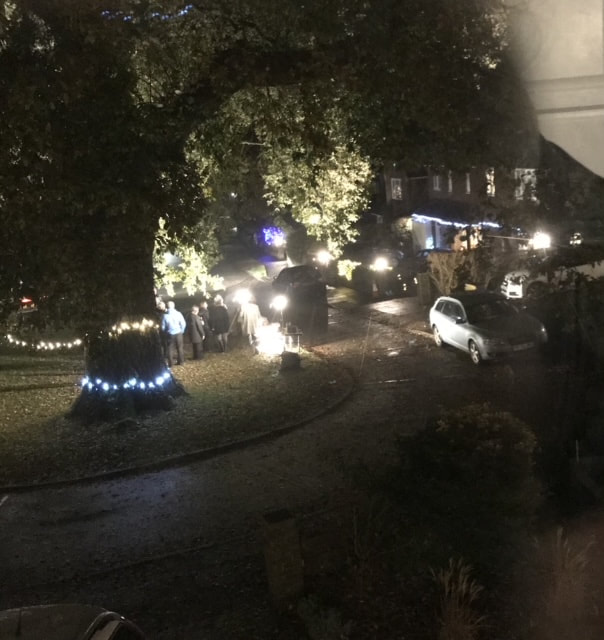 The Festive Lucombe, Christmas 2017
However, even though the Carols could not go ahead, 2020 was a year when the Lucombe Oak was an even more regular focal point for community events.  We had a VE Day event in May 2020 to commemorate the 75th anniversary of the ending of the 2nd World War in Europe, where we had coffee and cakes under the tree to the sounds of Glenn Miller. The day ended with many residents standing at a safe distance in the sunset while we listened to a recording of Dame Vera Lynn’s We’ll Meet Again. In a year of the Covid Pandemic, this seemed particularly poignant, as we could not meet or be with so many people dear to us at that time. 2020 was also the year when we Clapped for Carers outside our front doors or under the tree every Thursday evening for several months. Then in 2021 this tradition was resurrected when residents stood in silence then clapped for Sir Tom Moore after he passed away, aged 100. 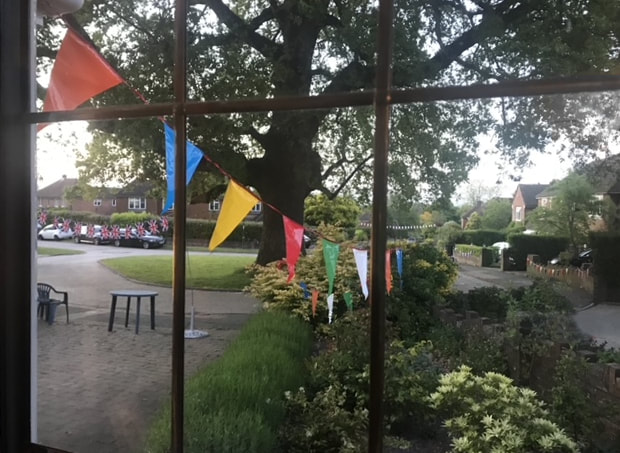 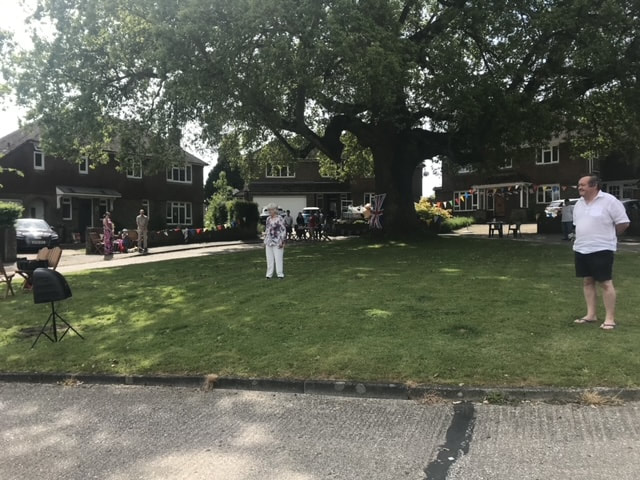 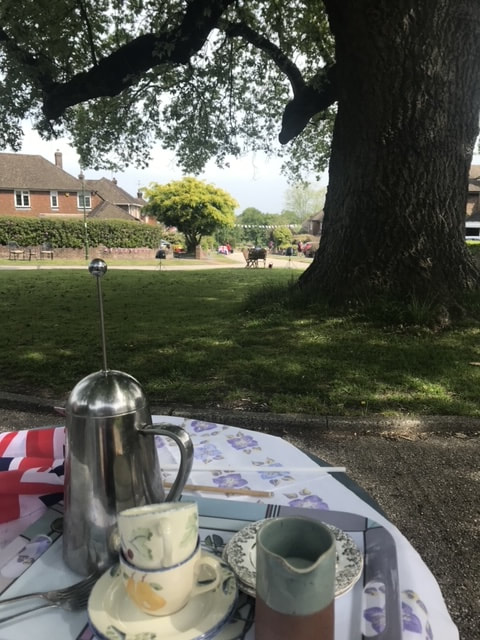 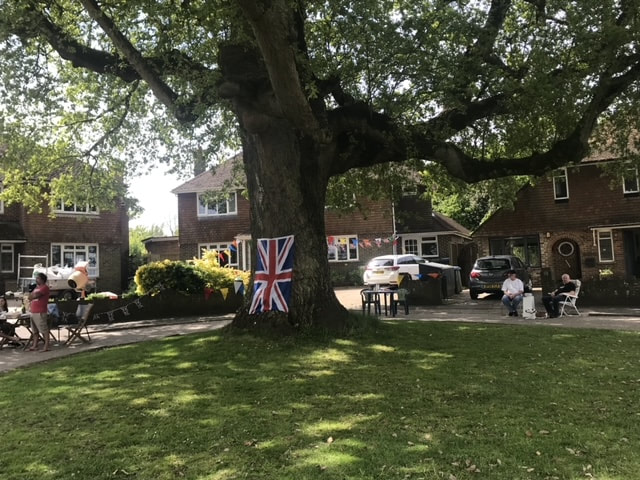 A socially distanced VE Day 75 under the oak, May 2020
The Lucombe Oak in Mill Drive  is a beautiful tree all year. It can be seen from many parts of Henfield on the skyline as it is the tallest tree around, and it can even be picked out from the top of the South Downs if you know where to look. It is a home to so many birds including tree creepers, crows and chaffinches and many insects too. Tree enthusiasts from outside Henfield have been known to drive up Mill Drive to stop, take a good look and admire it. 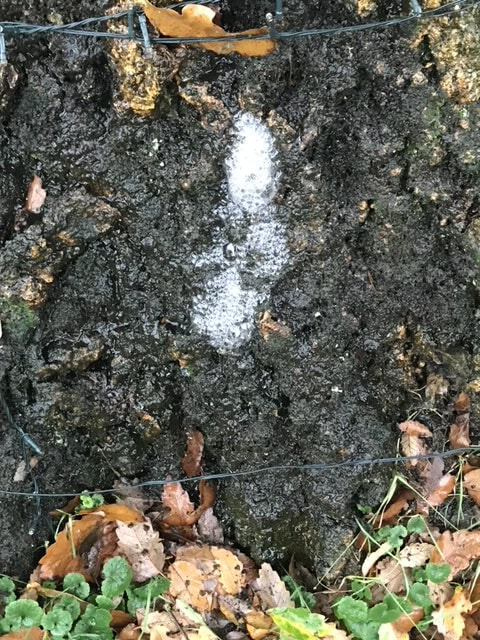 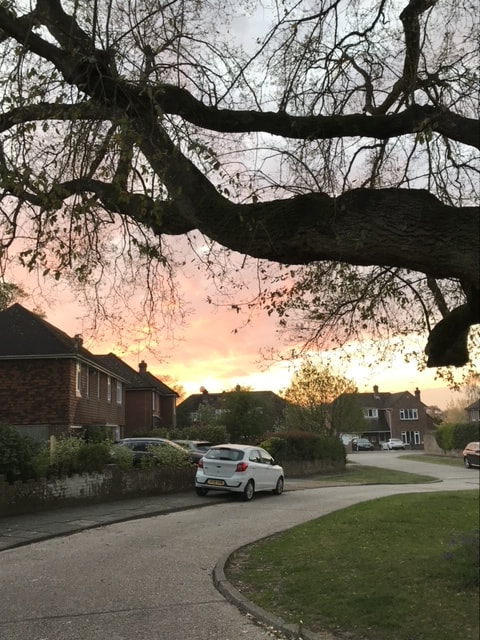 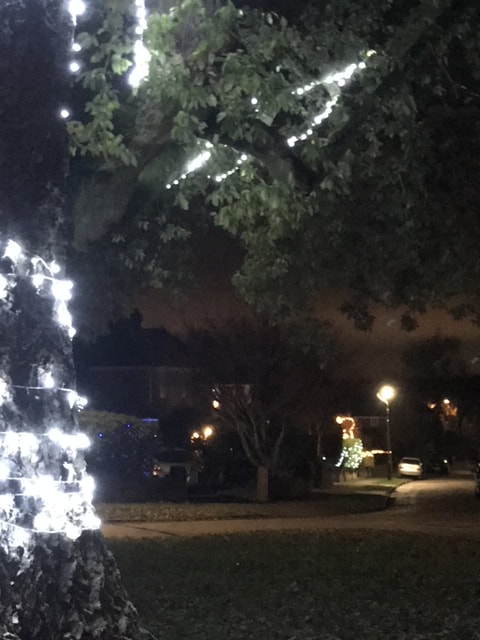 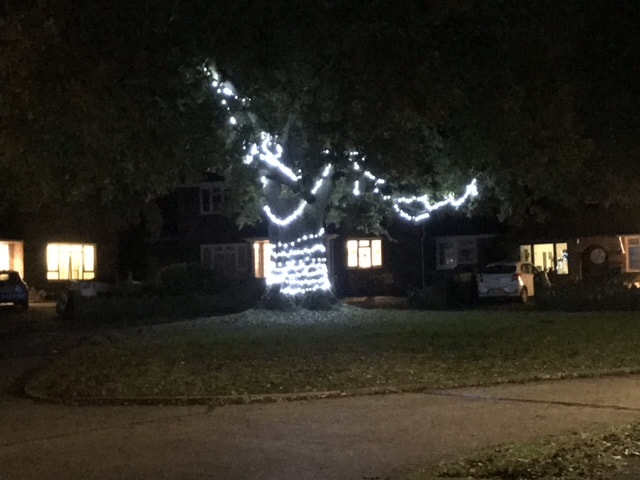 Mystery liquid, sunset and the decorated oak for Christmas 2020
There has been occasional worry for its health. Some say it didn’t use to lose all its leaves but although it is largely evergreen it has shed most leaves by March in the last couple of years. In January 2020 it exuded a strange bubbling liquid near its root base but our local Tree Warden, John Willis, checked the symptoms and was reassuring. He told us the tree should be fine and it would most likely be a short lived issue, which it seems to have proved.

We think the tree is at least 180 years old. It has seen so much history and is still a beautiful natural landmark for us all. 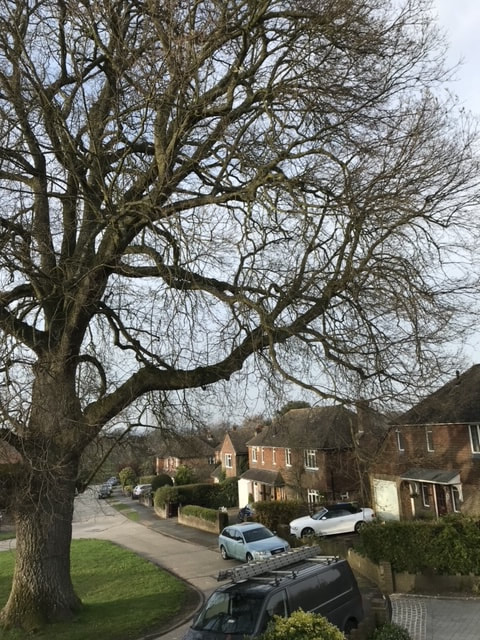 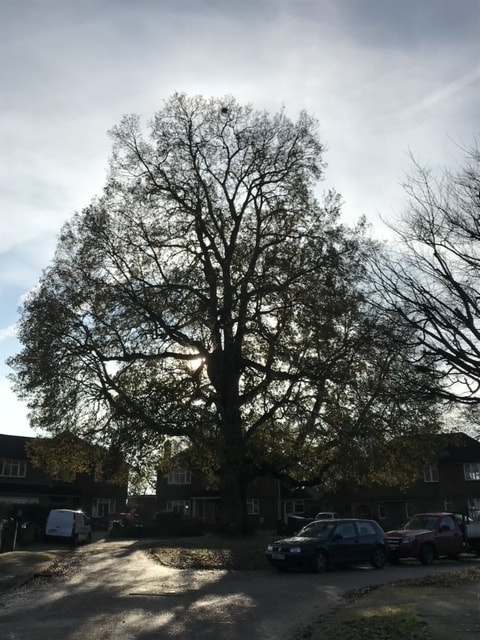 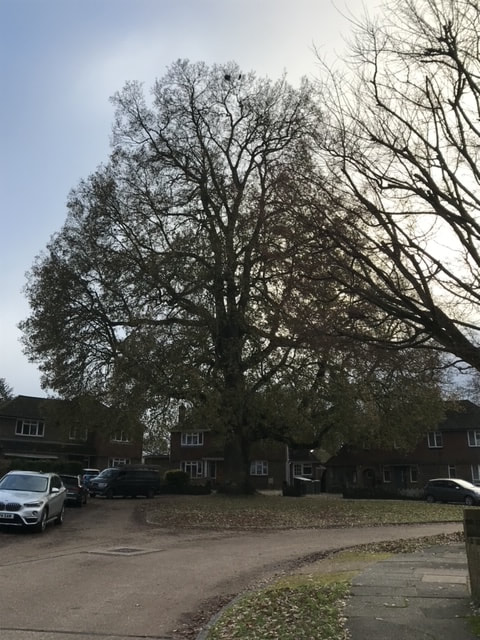 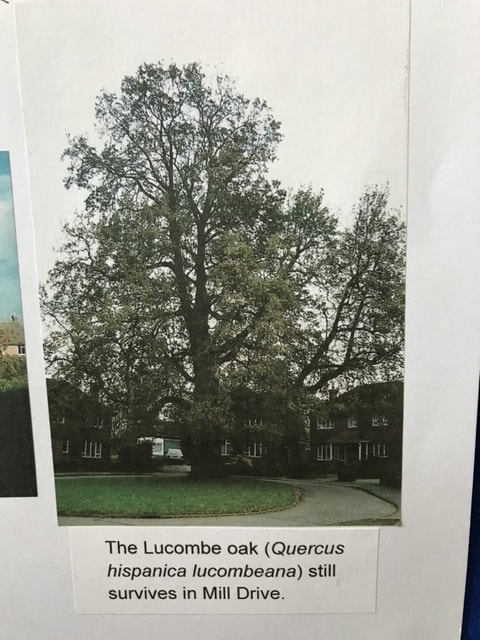 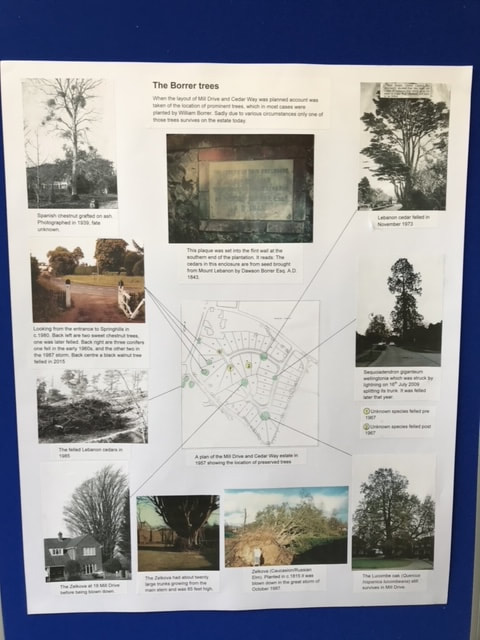 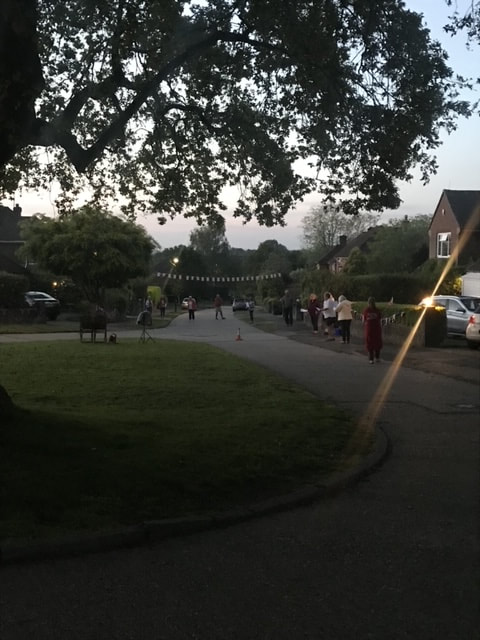 Views of the oak in different lights, and as featured in a museum display on William Borrer's garden
Eager to discover more about the origins of the Lucombe Oak?