An introduction to the project

Our Friends led oral history project aims to collect memories from Henfield residents. The museum began recording oral histories from the late 1980s onwards and it is intended that many more will be collected.  The collection ranges across whole life stories and partial or focused stories of residents’ experiences of living in Henfield. The current focus is on recording stories from as many people as will volunteer, with the emphasis on inviting older people to contribute.

The recorded stories can be used as a source of information about different aspects of life in Henfield in specific time periods.  Examples include; work, childhood, games, songs and music, shops and shopping and clothing from the Victorian era through the Edwardian, to the ‘40s, travelling on the railway, Henfield in the war, and life in Henfield after the 1940s and '50s and on through the decades. We are looking for memories about different occupations local to Henfield such as farming, brick-making, and market-gardening. We will also include memories from outside Henfield, particularly those of experiences common to all such as experiences during the war.

We want to develop ways of accessing the oral histories. In the Museum we lack space, but would like to have exhibitions of the transcribed histories, and find means of accessing spoken histories, such as via touch screen and headphones in the museum - and on this website!  We would like to take recordings, or edited recordings, to schools and other organisations that would benefit from hearing about Henfield in past times.

When Coronavirus restrictions were put in place in March 2020, the recording of oral histories ceased, for the most  part, until early 2022. In lieu, we put out the word locally for written submissions for a 'day in the life of lockdown'. The aim was for locals to describe their thoughts, what they were doing, their worries and maybe the unexpected pleasures they experienced.

The best social history is that written at the time, by people living through the events. We had an opportunity to create a record of experiences of people here in Henfield, for posterity. We hope future generations will not have to live through a pandemic such as Covid 19, but it is important for them to know about it.  Each ‘Day in the Life’ will be stored in the Museum archive, for people to read: they might be collected into a publication, or used in our schools and will be a record of how Henfield felt, managed and suffered during this time.

The Henfield testimonies are now part of the wider Covid-19 Testimony Projects Database, collated by the British Library and can be viewed on request.

From the Museum's own perspective, the pandemic certainly provided some silver linings. The impetus for the creation of this website arose and our social media accounts grew, both providing worldwide access to our collections.

"At one time I arranged entertainments for the WI every year, out of doors, either in Henfield Place garden or Whaphams garden. One year I was absolutely sunk - all ladies with small voices, no words would be heard. I suddenly thought 'I know, I’ll make a circus up!'  So I made an elephant with a big head and a trunk, and two horses’ heads, and I was a weight lifter with red tights and a leopard skin. We had a wonderful band: about eight people in the band and lots of instruments, and four or five clowns.

We had it for a long time; we would take it round the countryside. One time I looked at the elephant and saw the backside had fainted, and it was sitting down on the truck! I unzipped the army blanket and plucked the body out, carried her to the chemist who gave her sal volatile and she came round!

We went by charabanc to Chichester and out of the back of the coach there were two beer barrels, and the ladies in Chichester from the WI were horrified. ‘Good Heavens! These people have brought beer!’ But no, they were for the elephant to sit on!

One girl wanted to be an ostrich, so I got a walking stick and put feathers all down it, made a head at the top with a beak, and a wire frame for the body. Her long beautiful legs were encased in creamy coloured tights with splayed feet on the end. But we didn’t realise that all birds’ legs bend in the opposite way to ours so she looked completely crazy! I was behind her in this big arena at Bishop Otter College in Chichester and there was a tree, a tall tree with a pompom of growth. I could see it, but the ostrich couldn’t, and to my horror I saw her go into the tree, and lose the top of the ostrich’s head, caught up in the branches!

Keith Burchell, from Warnham, gave a fascinating insight into brick making. This is of particular interest to Henfield as we had a flourishing brickworks on the way to Small Dole, with locals sometimes also making their own clay bricks (including the Station Hotel - as of 2020, the Old Railway). The ponds on Broadmere Common were formed by the excavation of clay to make bricks. Keith said:
​
"My grandfather started brick making before the 20th century began. The bricks then were all made by hand - the clay was dug by hand and people were feeding the mixers.  Some of the processes of preparing the clay for brick making were driven by horses: the horses would walk round the pan of clay in a circle, water was added, and it came out of the end underneath and was put on to the handmakers’ tables. You can see a handmakers’ table we donated at the Singleton Museum (note: Weald and Downland Living Museum). For one week a year they give people the opportunity to make bricks by hand, by throwing the clot of clay into the mould, and turning it out to be dried and then fired. The drying cycle is about forty hours: you can’t dry things made by clay fast or they shrink too quickly and the migrating moisture from the centre tends to form cracks.  The bricks were dried outside in the summer in ‘hacks’,  canopies under corrugated sheets.  It was a seasonal affair in those days.

In the very early days if you were building houses in a particular area, because we are sat on Weald clay which is a  brick-making clay, you would set up the brickmaking tables and so on close to where you were building the houses.

In my day there were steam-engines which drove through a rope pulling system with line shafts through the making sheds. Each individual machine was driven with a belt from pulleys on the line shaft. They were huge steam engines: 750 horsepower.  There was an award, a shield that was displayed on a shelf, for the best kept boiler shed and the best kept steam engine in the company. If you were silly enough to venture into the steam engine shed with dirty boots on, the chap who used to walk around doing nothing else but polishing and lubricating the engine would give you the big E - you were told to go!"
Building the Guide Hut (Eddie Sayers and Pat Collins)

"Pat’s wife was the instigator of it: she decided it was time the Guides had their own Hut. She went to Horsham Council and they found a piece of spare land down Staples Barn, and after two years trying to get permission, we eventually got it from Horsham Council.
​
West Sussex County Council offered us two school classrooms, but they were in Crawley, so we had to get a gang of about ten Guildsmen go up to Crawley for three weekends, and take those huts down, and I tell you it was jolly hard work.
We brought them back to Henfield and once the planning went through, we started to build the Guide Hut. Now Pat and I spent two years doing this, every weekend, every bank holiday, and we’d  done a day’s work before this. Pat was a bricklayer and I was a carpenter, joiner, by trade. There were very few tradesmen, it was up to us.

Eventually we opened it in 1981, and I can tell you this: those classrooms were built in 1935 and they are still going! In good condition too!​" 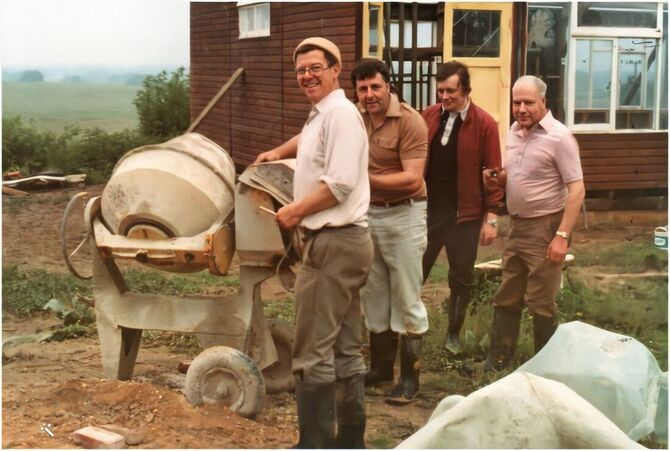