Henfield Museum has over 250 maps in its collection, ranging from the local tithe map to many historic OS maps and an idiosyncratic self drawn map by a Victorian Henfield resident. In addition, we also hold a number of historic aerial photos of the village from various angles, or of specific areas.

​All of these show the dramatic change Henfield has seen, particularly since the Second World War, with old industries departing and the population tripling. An example aerial photo is seen below - maps in our collection can be viewed in person - please let us know in advance what you would like to view.

​
Ordnance Survey Maps in our collection

Please note that some of these maps can be viewed online and with satellite overlays at the National Library of Scotland. They are ordered below by survey/revision date with publication date in brackets where known. 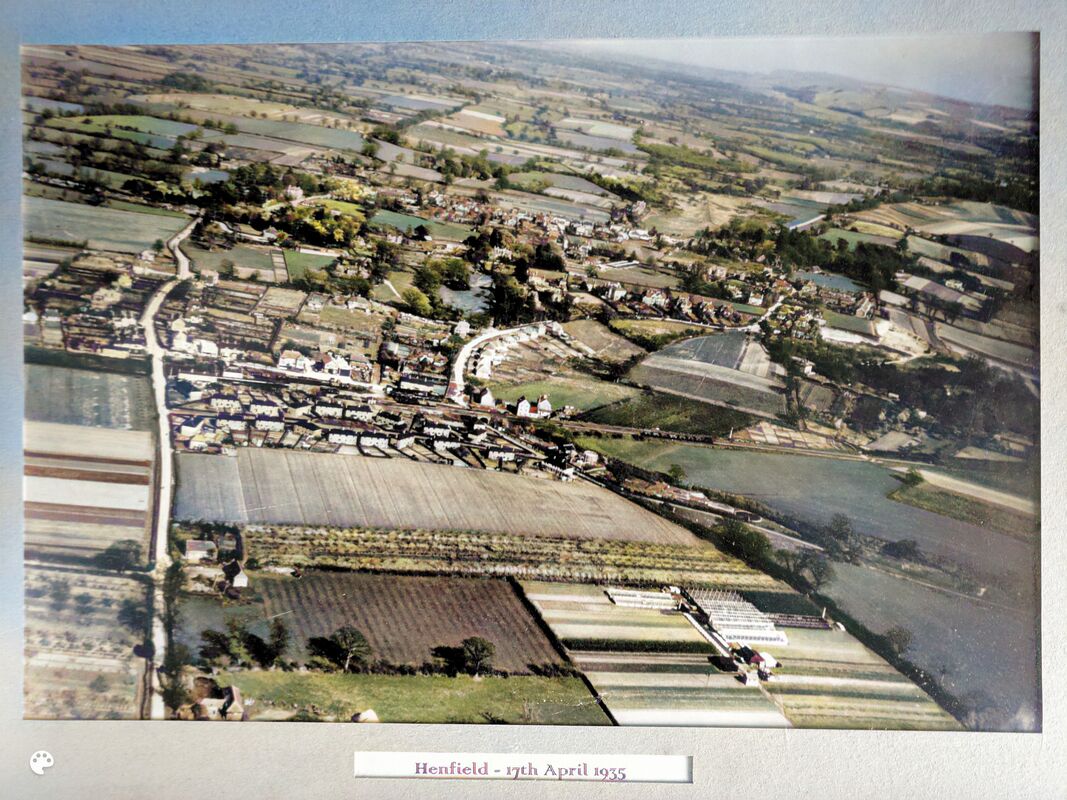 Aerial photograph of Henfield from the west, 17th April 1935. Henfield Museum Collection (CC BY-NC-SA)
Taken from the west, the old lines of development around St. Peter's Church, along the High Street and at Nep Town can clearly be seen.

The Victorian villas along Broomfield Road stand out, as well as the newer area of development alongside the railway and the post WW1 Holland's Road council housing at the bottom of the photo. Note also the limited tree cover on the common, the final area of sand pit excavation at far right and one of the several areas of greenhouses in the area of West End Lane at the bottom of the photo.
Original 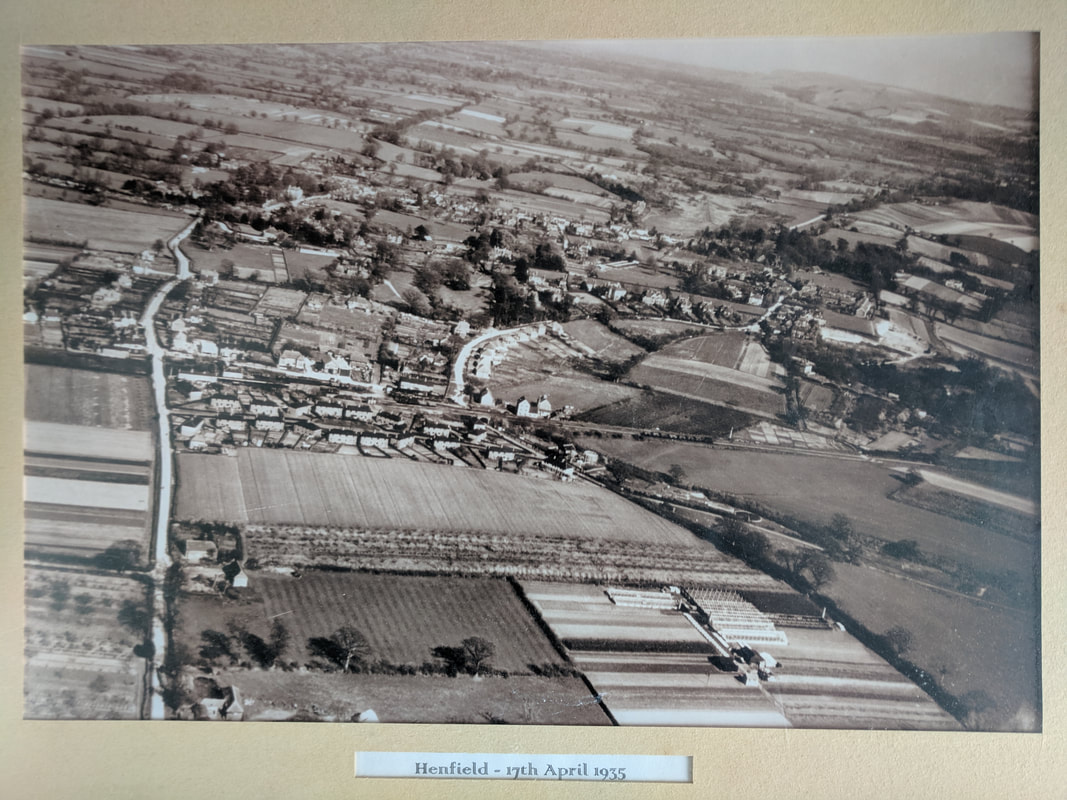 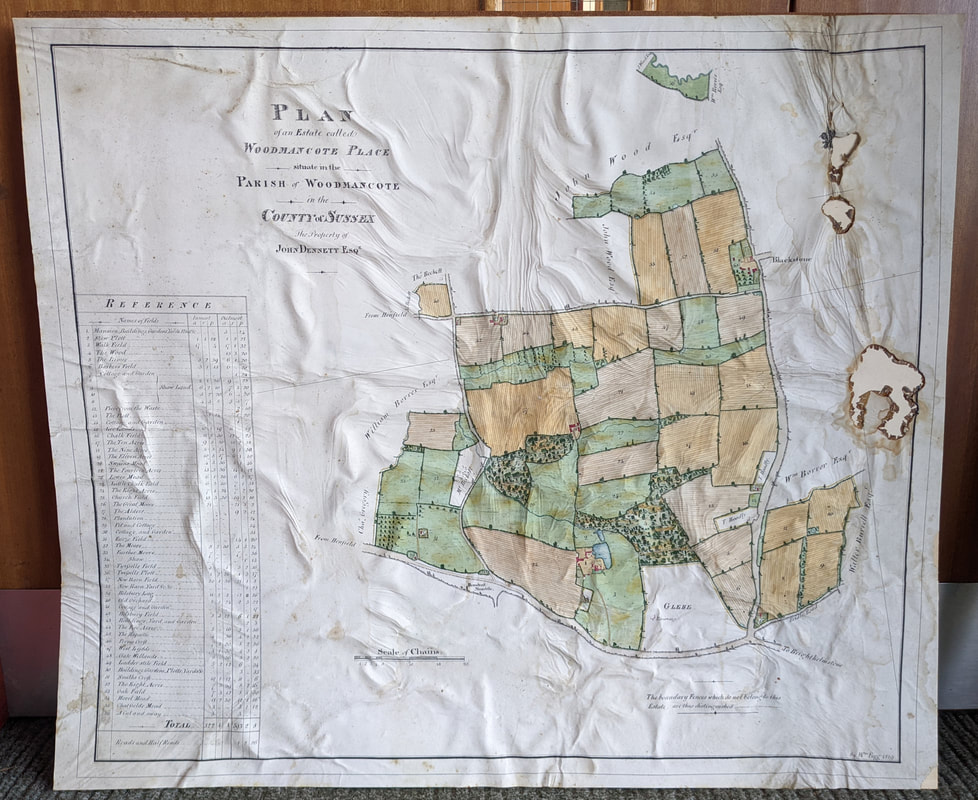 Donated to the museum collection in 2022, this plan of the Woodmancote Place estate is sadly water/glue damaged but still shows vibrant colour. It was drawn by cartographer William Figg of Lewes for landowner John Dennett Esq. in 1819.

​Prior to the drawing up of the parish wide tithe maps of the 1840s, such private maps offered a narrower but invaluable spotlight. Already an established manor in Anglo-Saxon times, the same line of the Dennett family were in residence from purchasing the property in 1693 to the late 19th century.

As well as the traditional field names, those of well known local landowners are visible: Walter Burrell Esq. of the Knepp Estate, William Borrer (at this date most likely the father of Henfield's botanist), John Wood Esq. of the then recently built Chestham House, Charles Gregory as well as small parcels of land belonging to members of the Beckett and Hoadly families. The three prominent landowners of the day seen here all also served as High Sheriff of Sussex (Dennett, Borrer and Wood) for an annual term - somewhat of a social obligation if nothing else.
The 'chain' measurement had been in use since the late 16th century, originally based on specific lengths of exactly that. One equalled 22 yards. Or as mapmaker John Ogilby described it as follows in his 'Britannia' of 1675: '...whereof the mosts usual has been the Chain, and the common length for English Measures 4 Poles, as answering indifferently to the Englishs Mile and Acre, 10 such Chains in length making a Furlong, and 10 single square Chains an Acre, so that a square Mile contains 640 square Acres...'

We hope that in future if sufficient funds become available, the condition of this map can be stabilised and somewhat restored.

The National Library of Scotland provides an excellent free resource for digital historic Ordnance Survey and other maps in addition to modern LIDAR imagery. These are view-able on their own on the website, in overlay or side by side with modern satellite imagery. Digital downloads or hard copies can be acquired for around £10.

The National Library of Australia provides free access to the 1st edition OS Map of 1805.
Return to homepage