In few places in the world can a charitable trust be found still operating under its original charter signed over three and a half centuries earlier. Henfield is one such place.

The Dame Elizabeth Gresham Charitable Trust was founded on 4th November 1661 by its namesake, three years before her death. The elder sister of the country's Postmaster General Henry Bishopp of Henfield, she had herself married Sir John Gresham of the famous Gresham family of London.

We hold our annual service - by an annually varying 'godly able minister' - on All Hallow's Day, in the Parham Chapel of the Bishopp family at St. Peter's, Henfield. Funds originally supported the needy in the form of flannel (cloth) which at the time of founding was a much dearer possession than today. Beginning with land at the 'Greater Pockerlee', the 'Pistolowe' field was added in 1703, generating the funds for donations and the annual service ever since. A committee of trustees has run the charity continuously ever since, with Elizabeth's brother Henry one of the first six. Many well known Henfield names have made their appearances over the subsequent centuries.

Until recent times, cloth would be both bought and made into clothing locally in Henfield shops. The images seen below show some of the elaborately designed Victorian bills of sale from High Street shops Longley's and Tobitt's.
Today, although no tailors remain in the village and the definition of the needy has necessarily now been expanded, the trust continues to make annual donations to local good causes as directed in Dame Elizabeth's original bequest of 1661. We aim to vary recipients every year or two, with donations in recent years having gone to the Henfield Haven, Henfield Youth Club and St. Peter's School. 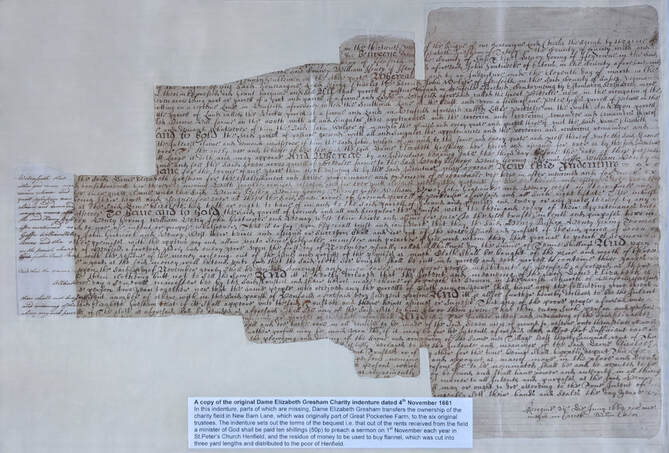 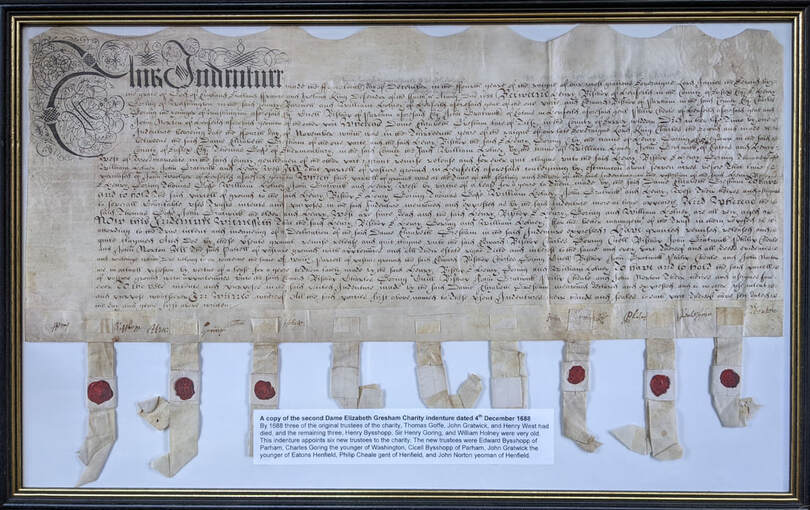 This second, 1688 indenture marks the handover from the three surviving founding trustees of 1661 to the six succeeding trustees

The charity tercentenary in 1961, held at St. Peter's Church, Henfield
Snippets from the trust's history...
​
Ornate Victorian invoices from well known Henfield businesses Longley's and Tobitt's detail flannel to be donated at the service. Another from Martin's details the repair of the gate to one of the two Gresham fields (known generally as the 'Parish Fields') and a poster advertises the letting of the land. 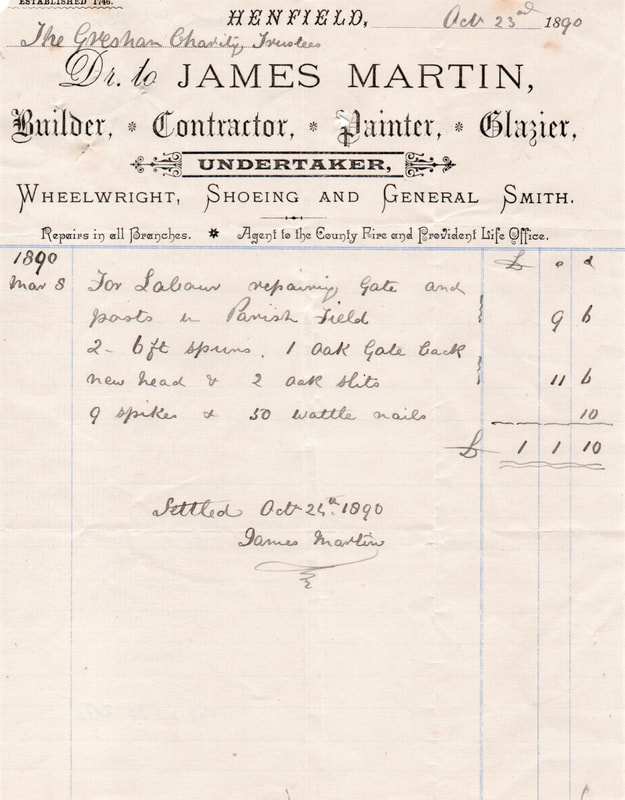 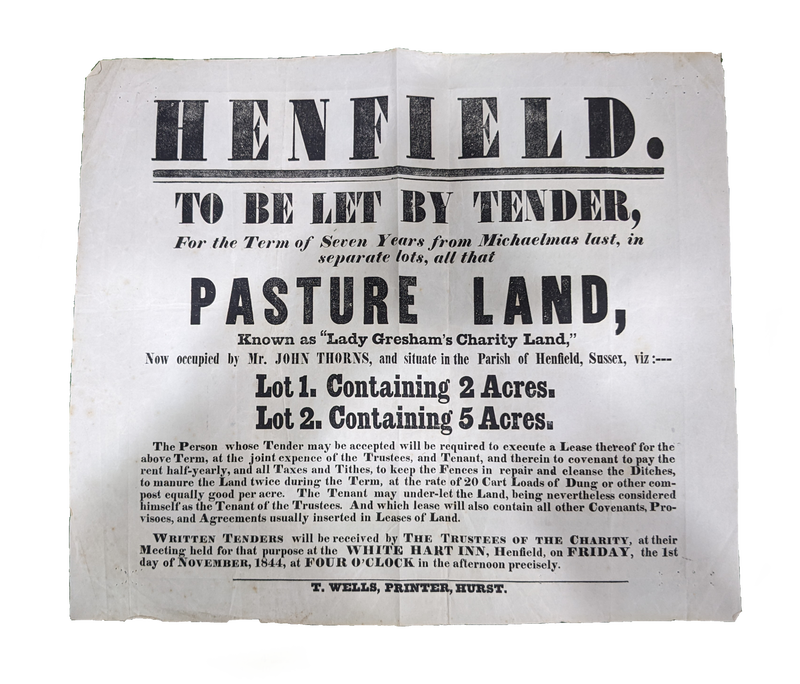 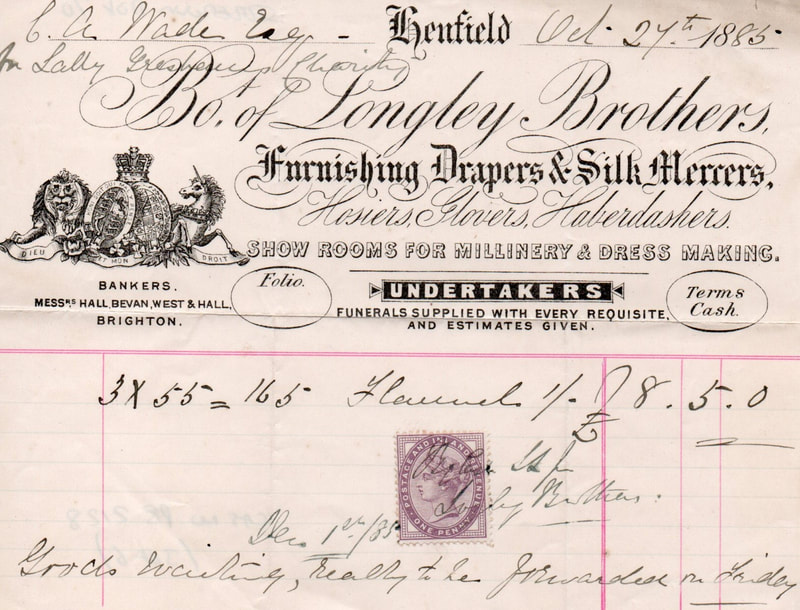 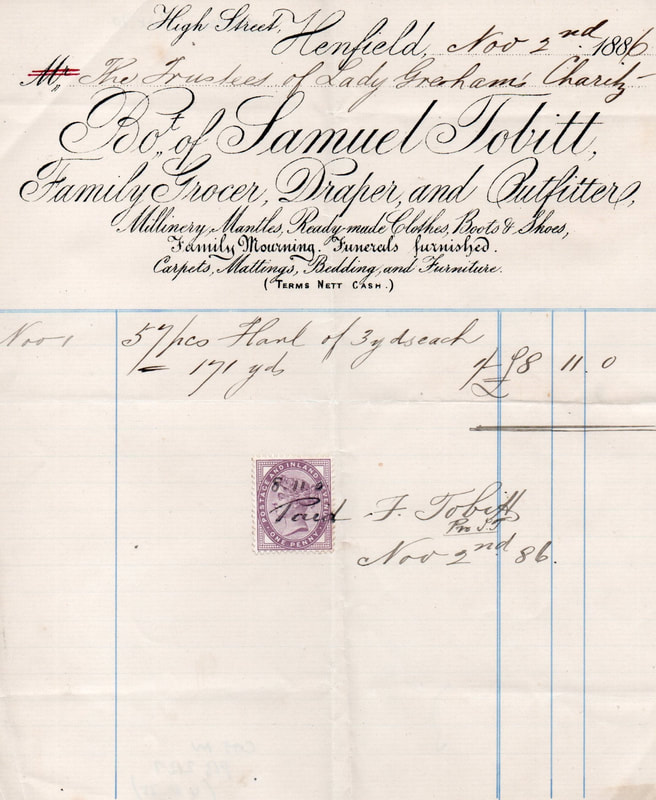